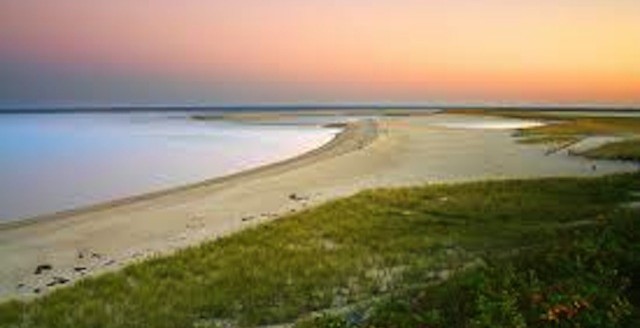 “My life is like a stroll on the beach…

To those of us who know, love and frequent the Nantucket beaches, it comes as no surprise that National Geographic’s new book “The 10 Best of Everything” named Nantucket beaches some of the top ten best in the world. I suppose the only surprise to those of us deeply devoted to our island’s sandy shores is the fact it was Number 6 instead of Number 1.

If you live here or frequent the island, you no doubt have a favorite beach or perhaps a “best kept secret” sliver of sand that very few others have discovered yet. Some days it’s fun to join throngs of other “beach bums” and check out who has the season’s coolest beach gadgets or who’s wearing the most outrageous swim trunks. If you are like me, there are other times it’s nice to just take your book and beach chair and find a slice of solitude for a few hours as you let the warm sun and cool sand rejuvenate your soul.

There is a mystique about the beach experience that is hard to identify. What is it about the zillion granules of sand and the boundless ocean that entices we humans to leave our 4 walls and clamor to be part of it? I suspect it’s because it so powerfully affects all 5 of our senses. The beauty of the water and sky, the aroma of the ocean air and beach roses, the sound of the waves as they crash against the shore, the taste of salt water from the overspray and the feeling of that cool sand between our toes. Few other experiences simultaneously stimulate our senses the way an afternoon spent seaside does. You virtually never see anyone having a bad day at the beach – it’s a happy place.

The intrigue of the beach goes beyond its beauty. Without warning it can gobble up your possessions. I’ve watched friends lose cell phones, sunglasses, keys and children’s pacifiers. A treasured item is dropped, a little sand gets stirred up and the next thing you know the coveted belonging sinks into a black hole in the center of the universe. I’ll bet you have a story of losing something precious on a beach in Nantucket.

Every now and then you hear a happy ending or a “believe it or not!” story. I have one. A few years ago my daughter Ashlie left a cherished blue topaz ring (a 13th birthday gift from her dad) wrapped in a t-shirt on top of her beach towel. She didn’t miss it until she returned home. The family/friend search party was called out and a caravan to the beach ensued. Everyone fanned out with eyes riveted to the sand…hoping against hope to spot something shiny. No luck. 3 days and 2 million tears later, we returned one last time to that expansive stretch of golden sand hoping we could defy the odds. We congregated near where she thought her beach towel had been. Just as we were preparing to dig to the center of the world, my daughter-in-law Melissa brushed her sandal across the sand and “tada!” the sparkling ring miraculously appeared. More tears, several high fives and a few “what are the odds?” later, we all paused at the water’s edge to consider how serendipitous life really is.

The next time you find yourself on one of Nantucket’s beautiful beaches, take a stroll along the shore. Inhale the salt air. Let your feet sink deeply into the sand. Gaze out at the expansive ocean and reflect on the wonder of it all.